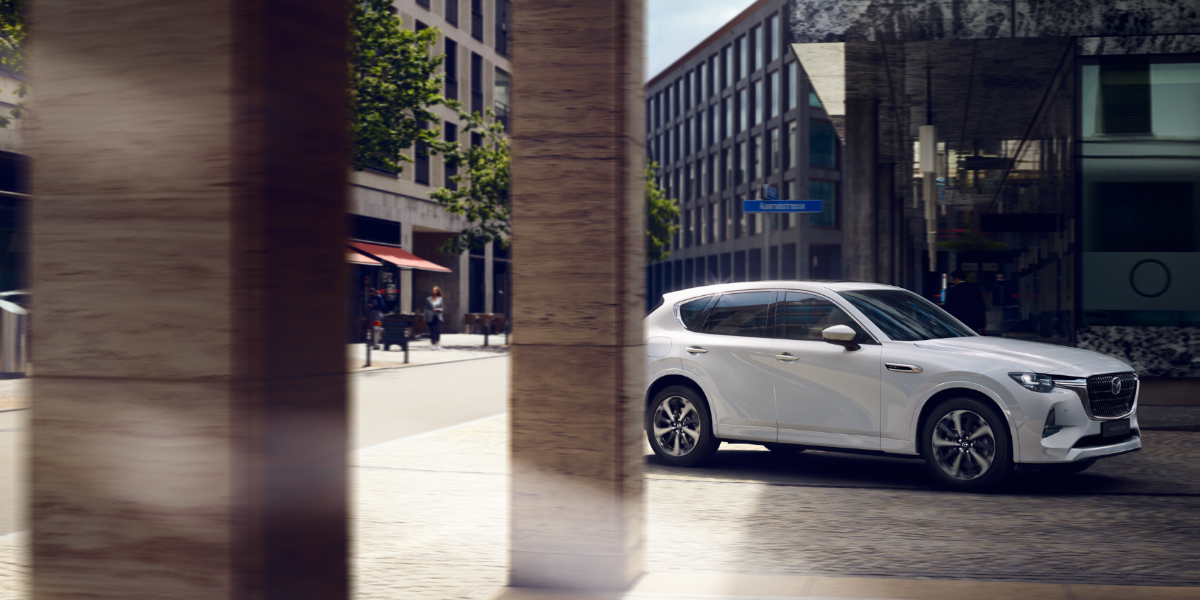 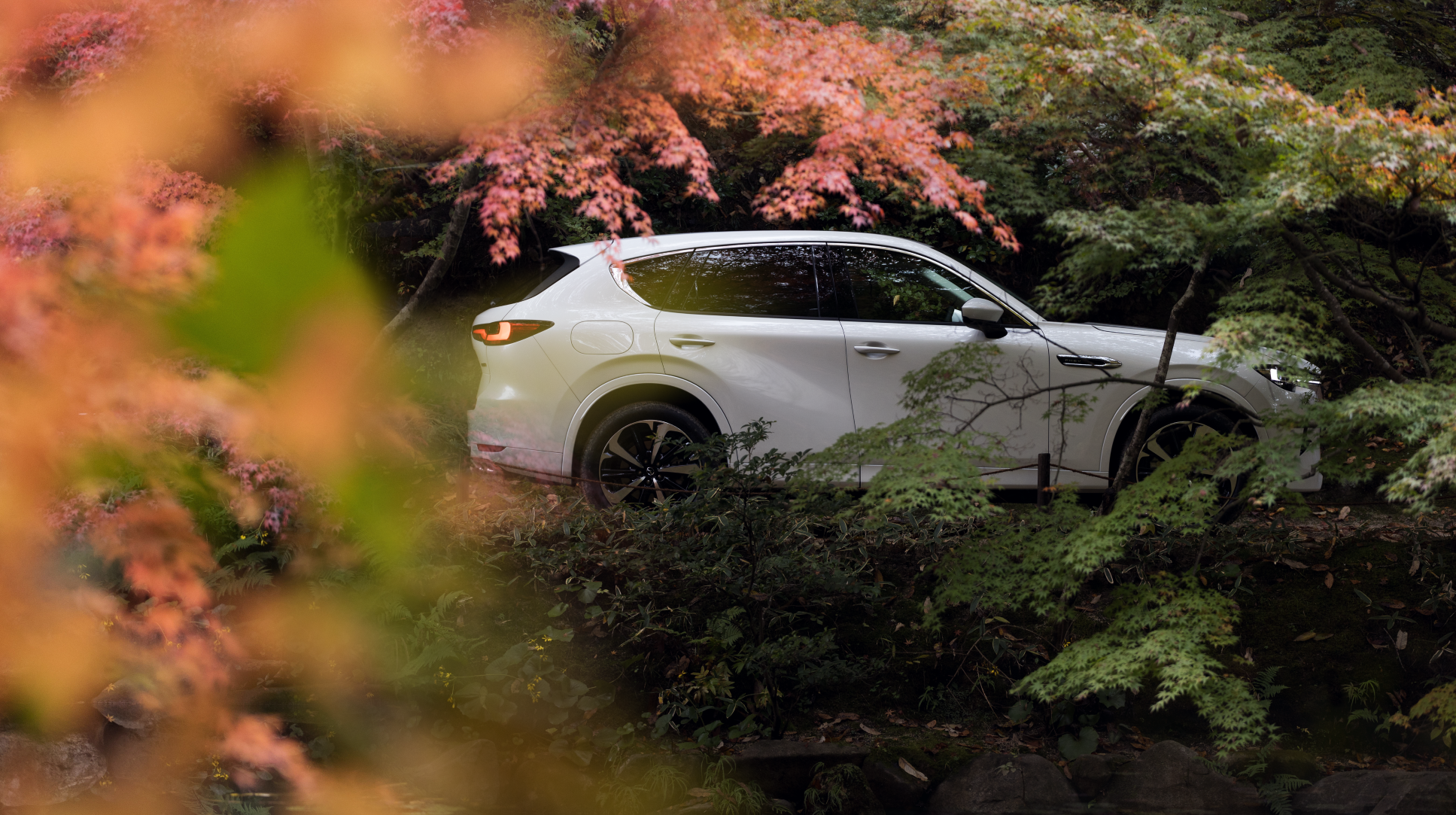 When it comes to luxury SUVs and electric technology, there’s been a massive influx of options. With this, comes questions – which ones are affordable and practical, considering electric technology is still relatively new. But when you’re talking about Mazda, one of the biggest car manufacturers in the world that has seen an enormous improvement in quality and luxury design, you know that you’re getting something revolutionary with each new release.

On March 8, Mazda Motor Europe finally unveiled its newest crossover SUV, the CX-60. It will be the flagship model of the brand’s new Large Product group models, designed for enhanced driving experience and safety. In Australia, Mazda will be releasing the CX-60 as its first plug-in hybrid SUV which has gathered a lot of excitement amongst car enthusiasts. It will feature a 2.5-litre in-line, four-cylinder gasoline engine and an electric motor. The model will be available in the market at the end of 2022 and is estimated to be priced from $55,000 according to Wheels magazine.

Mazda CX-60 Australia SUV promises to impress with every turn as it “represents everything that Mazda has built into its DNA over the last 100 years…”. Featuring a sleek design and the revolutionary Japanese technology and craftsmanship that the car brand is known for, it’s no surprise why many Australians are looking forward to this new flagship model from Mazda. Let’s take a closer look at this crossover SUV and what it has to offer for consumers.

To combine simplicity with efficiency, the new CX-60 was designed following the Japanese concept of Ma, or the calm and dignified beauty of space and the “less is more” principle that conveys simple lines, making a huge impact on its aesthetic. You’ll see that the new CX-60 features sleek lines from front to back, highlighting its front engine and rear-wheel driving capabilities. These lines also reflect light to make this SUV a unique shine. This new flagship model was also designed to be luxurious yet functional. Each part of this car was carefully thought of, and only the best materials and craftsmanship were used, staying true to Mazda’s reputation of excellence over the years. You’ll see maple wood in its panels and Nappa leather in its upholstery to ensure utmost comfort when you’re driving. 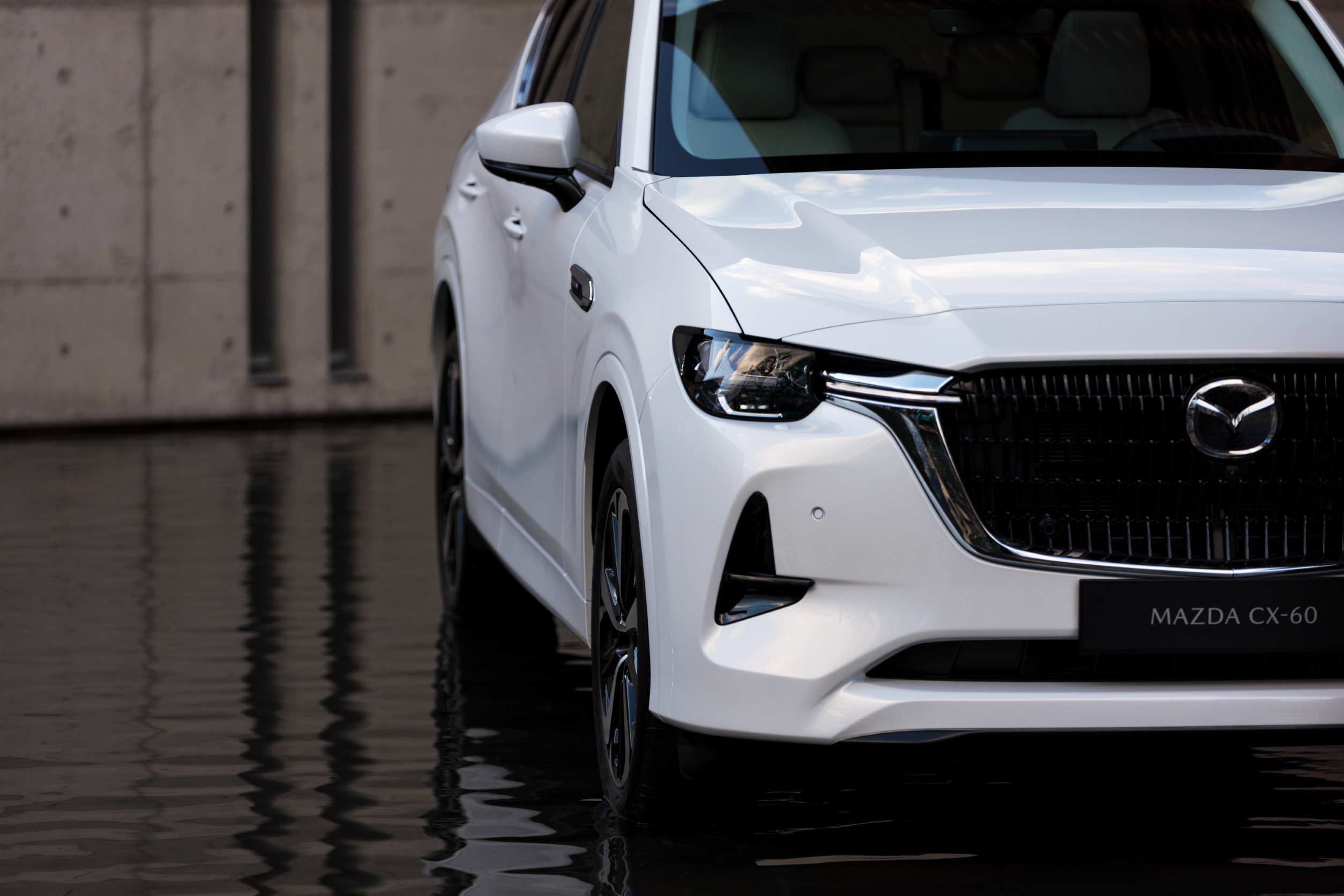 The Mazda CX-60 Australia measures 4.75m long, 1.9m wide and 1.7m-1.7m tall with its wheelbase at 2.8m. This makes the SUV longer than its German counterpart, the BMW X3, by 37mm with an extra wheelbase of 6mm. In terms of storage capacity, the CX-60 will have 477 litres of cargo capacity, with all its seats folded up to the beltline. This makes its total storage capacity up to 570 litres when you add its underfloor storage compartment. If you drop the rear seats altogether, you’ll have 1,725 litres of cargo capacity from the underfloor storage to the ceiling. Some of its other notable design features include:

If you invest in the higher-spec model of the Mazda CX-60 Australia, you’ll also get the revolutionary Drive Personalisation System. The system can give you the same driving experience by using face recognition to identify the drive and set up everything from the head-up display to the seat based on how you prefer them to be. You’ll get to experience all these design features when you get the chance to book a Mazda test drive. 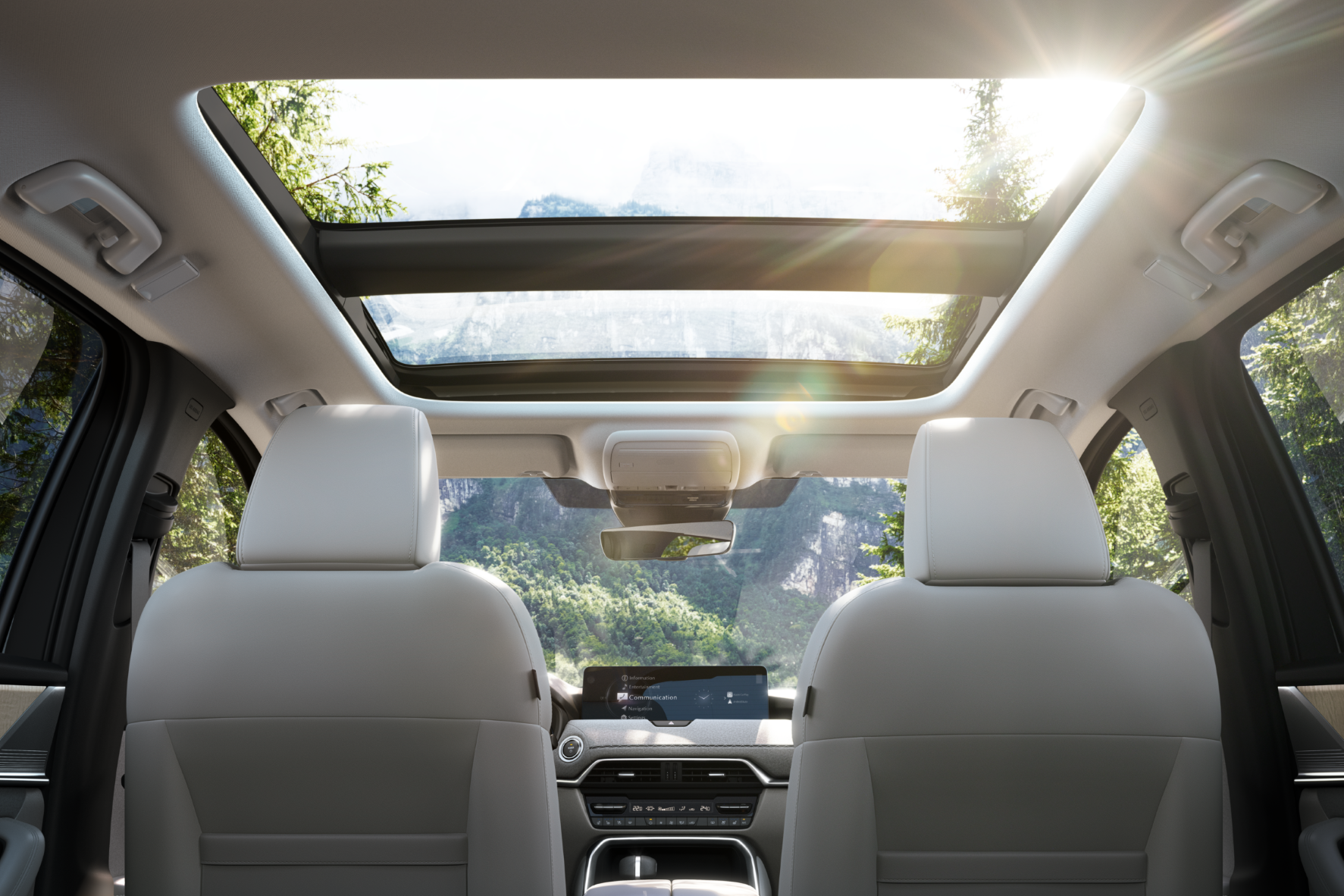 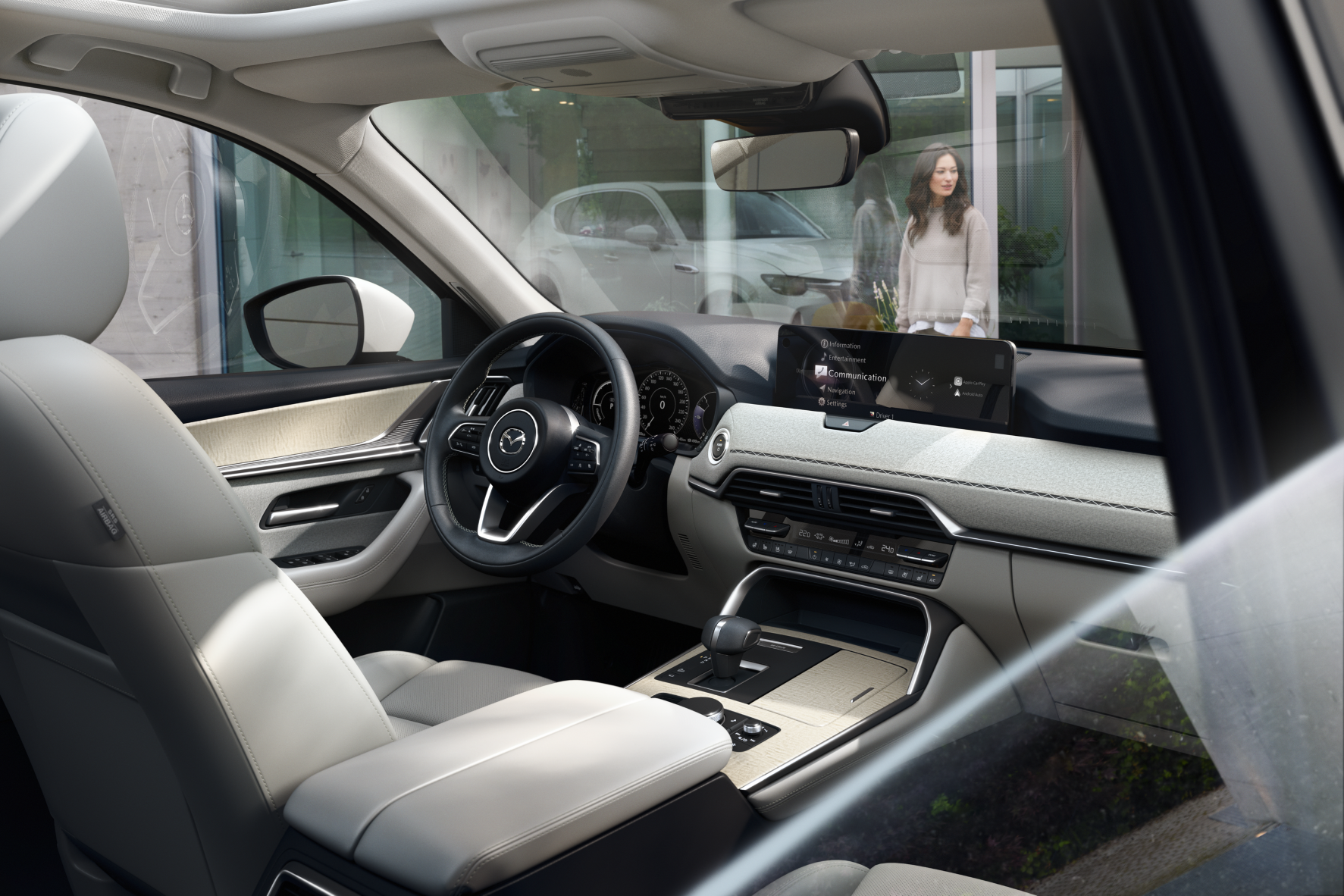 For serious car enthusiasts, what makes the new Mazda CX-60 Australia very interesting is its plug-in hybrid (PHEV) engine, a first for Mazda. It is powered by a 2.5-litre petrol engine capable of 141kW and 261NM and an electric motor producing 100kW and 250Nm. It also features a 17.8kWh lithium-ion battery pack.

The CX-60 is considered the most powerful road car Mazda has ever produced. It can produce a total system output of 241kW and a combined torque figure of 500Nm. The Australian release will feature the PHEV engine, but Mazda is set to release variants featuring 3.0-litre e-Skyactiv X petrol and 3.3-litre e-Skyactiv D diesel engines around the world. Mazda said that the car can go from 0-62mph in 5.8 seconds with top speeds of 124mph because of its 322bhp and 369b ft of torque.

These models will also have a 48V mild-hybrid assistance and in-line six-cylinder units. When fully charged for four hours from empty, the PHEV variant of the CX-60 can run for up to 39 miles of pure electric range at up to 62mph before the petrol power kicks in. 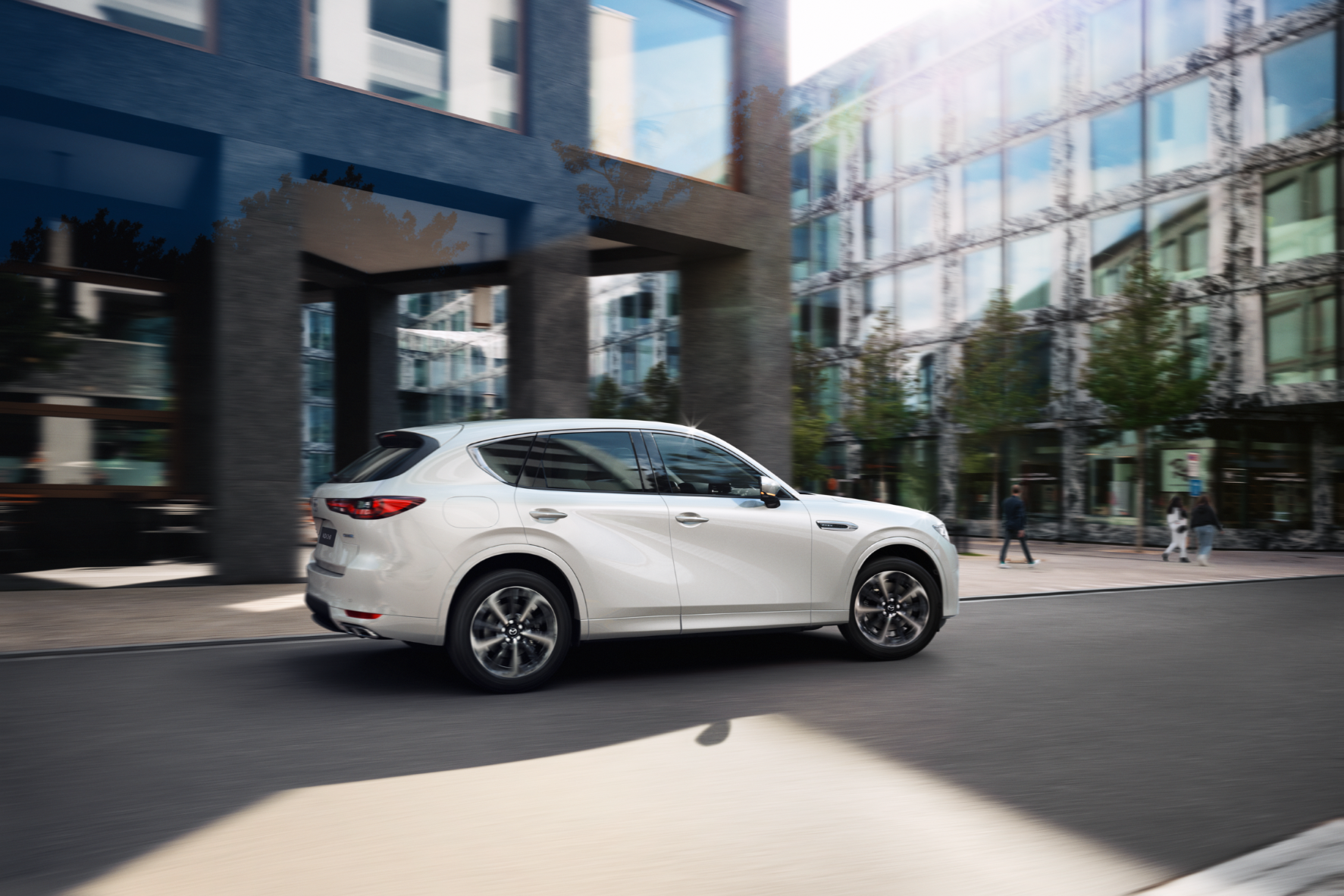 The PHEV model will also feature Mazda’s i-Activ all-wheel-drive setup, which is essentially a front-engine, rear-drive layout. It’s also said to be capable of 188mpg and CO2 emissions of only 33g/km. This flagship model for Mazda’s range of SUVs will feature an eight-speed automatic transmission with an integrated electric motor to replace the usually hydraulic converter and a multi-plate clutch adding to its efficiency. The same multi-plate clutch will support the car’s full-time all-wheel drive. Mazda is also set to release other powertrains in the future as part of the Large Product category of cars. This includes a pair of straight-six units, a 3.3-litre diesel sixer, and a 3.0-litre “e-Skyactiv-X” naturally aspirated petrol. Both models will come with the same rear-drive capability and a 48V mild-hybrid assistance for optimum efficiency.

Jeremy Thomson, Mazda Motors UK Head explained: “With the positioning of the high voltage battery at the centre of the car and as low as possible, this is a PHEV with a particularly low centre of gravity. This, combined with a permanent all-wheel-drive system incorporating shaft-driven transfer of torque between the axles, gives the car superior handling characteristics on a par with the best in the premium segment.” Simply put, you are getting the quality, efficiency, and style of a premium SUV without paying the high price for it.

Since the Mazda CX-60 Australia is designed with efficient and comfortable driving in mind, you can expect to see features geared towards ensuring that the driver and its passengers get the best experience with this new crossover SUV. For starters, you have Mazda’s signature Mi-Drive, which means that you get several driving modes, including normal, off-road, sport, and EV. Mazda also promises to follow the same Multi-Solution Scalable Architecture for the three CX-60s that it will be releasing. This means that we can expect bigger Mazda SUVs in the future. As with all Mazda models in the past, you can expect to enjoy utmost stability with the CX-60, and you can see this for yourself by booking a Mazda test drive once the SUV is out on the market.

Mazda vehicles are very well proportioned, and this SUV features a front-engine, rear-drive architecture that gives it a strong stance. Combined with the latest version of Mazda’s Kodo design language, you will feel the difference in comfort when driving this car compared to its counterparts.Inside the car, you’ll see a driver bias with interiors geared towards making driving comfortable and even luxurious for the driver. Aside from the touchscreen on top of the dash and a 570-litre boot, Mazda went all out with its leather, wood, and chrome combination for its interiors. You also have the option to choose from Exclusive, Homura, and Takumi trim, depending on your preference and budget. This gives the CX-60 a luxurious feel that you can only find in other more expensive SUVs.

What we can expect from the Mazda CX-60 Australia

According to Mazda Australia Managing Director Vinesh Bhindi, Mazda will be releasing vehicles featuring powertrain technologies across its range. He explained: “We will get the opportunity to decide which of those technologies and powertrains we match with which cars.” As for its price, Mazda hasn’t disclosed any numbers yet, and we can expect that figure to be announced closer to the launch date. The car manufacturer disclosed, however, that its Japan base will start manufacturing the new Mazda CX-60 Australia this month. We can expect it to be released to the Australian market in the summer.

The highly anticipated release of the new Mazda CX-60 Australia has a lot of Mazda fans in the country looking forward to getting their hands on this stylish, efficient, and highly powerful SUV that can rival those German brands that are priced significantly higher.

At Brighton Mazda, we expect to receive stock later this year and are extremely excited. If you’re interested, make sure to get in touch with us at Brighton Mazda to express your interest in booking a Mazda test drive when new stock arrives! Find us at 865 Nepean Hwy, Brighton VIC 3186, or give us a call on (03) 9559 0777.